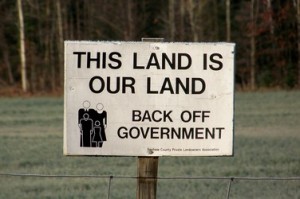 In feudal England no one owned land except the Crown.  A lord held land from the Crown, subject to certain rights and duties.  So long as the lord performed his duties, he and his heirs continued to hold the land.

Following confederation in the British Empire and under British Common Law, the Government of Canada claims ownership of the land.  (Unceded First Nations territory is another issue not discussed here.)

Over the years, the Government of Canada transferred title of land to the public through Land Patents also known as Crown Grant or Letters Patent.   The patents are documents used to transfer public (Crown Land) into private ownership.

The fee simple estate is the greatest interest a person can own in land and is as close to the idea of complete ownership as English law comes.  Thus, when we speak of a person owning land, we mean that s/he holds the fee simple in it.  The holder of the fee simple holds it for all time present and future, subject only to its return to the government in the event of dying without having relatives to inherit it and without having made a will giving it to some person.

The fact that the Government of Canada claims ownership of the land under law means that the land can be expropriated. Under the Expropration Act, when a public body such as the federal government or a local school board requires land for its activities, it may proceed under statute to force the transfer of land to itself.  It must pay compensation for taking the land, and if the parties cannot agree upon a price the statute provides for arbitration or judicial proceedings to determine the price to be paid.

Farmland is an obvious target for expropriation — vast, contiguous, often flat, “empty” and near urban tracts of land are easily built upon.  Let’s face it, at one point Ontario had a lot of farmland especially in relation to population.

However, today expropriation of farmland cannot be taken lightly.  Farming is important with significant economic impact to Ontarians.  We cannot keep taking from such a valuable employer.

This information has been compiled through private amateur research for the purpose of allowing the reader to make an informed and educated decision. While the information is believed to be reliable, accuracy cannot be guaranteed.